All exercise is not created equal. Here’s what you need to know about the fat-burning effects of cardio and weight training. 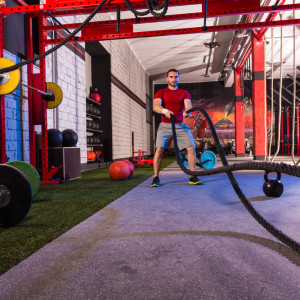 Have you heard that one joke where some fitness professionals insist that running makes you fat?

In a world where diets sell you on the idea of eating cookies to lose weight, it’s hard to believe that exercise professionals could consider any activity or form of exercise “bad.”

And yet, the anti-running crusade is not joke. There are those that genuinely believe lower intensity cardio is directly causing weight gain problems.

This is what happens when weight loss frustration sets in and people are looking for a reason to explain why the scale goes the wrong direction despite plenty of effort.

After all, it becomes easier to understand if you slog away day after day doing cardio and don’t see changes. Naturally, something must be wrong. But that usually that has more to do with why your cardio approach isn’t working, than anything “wrong” with cardio.

Running is not the reason you gain weight. But if you’re looking for the fastest way to see your body change, it’s not necessarily the most efficient approach.

There’s a big difference between “doesn’t work” and “doesn’t work as well.” Such is the case in the age-old debate between cardio and weight training.

Cardio has many benefits, including many related to weight loss, but also supports your ATP production (think energy for your workouts), aids in recovery, and even can help you relax and sleep better (by shifting your sympathetic drive in your autonomic nervous system; translation: longer, slower cardio can help you chill out.)

But if you’re trying to create the fastest path to dropping a few extra pounds, here’s why prioritizing weight training is important.

The Argument for Cardio (And Why It Isn’t For Everyone)

Just for the sake of learning, remember, cardio is not bad. It just doesn’t burn fat as quickly.

(Ok, let’s pass that around until we kill that myth.)

The short bouts of training would send your heart rate soaring, increase metabolic activity, and crush fat cells. The slower cardio would aid with recovery and make sure you don’t walk around exhausted, but would also improve your heart efficiency.

Think about it, when you train you become exhausted. Most of the time you only think about how tired your muscles feel, and that’s part of the equation. The other part is your heart just not being able to push harder.

When you perform slower, longer cardio, you actually are able to force more blood into your heart and expand the walls. This renovation means your heart can pump more blood and oxygen with each beat, making you much more efficient.

Rather than becoming gassed as you push harder, you can do a better job of fighting off fatigue and maintaining a higher intensity.

While it is easy to see why it’s ideal to perform both a mix of lower intensity cardio and weight training, the reality is most people are pressed for time and impatient. You want results as fast as possible with the least amount of work needed.

Not to mention, you might not have time for the a little extra cardio. You can call it an excuse, but it’s also a reality for many people. So why build a training plan you might not be able to maintain?

That’s why if you had to choose between weights and cardio, weights would be the more direct approach.

The majority of calories you burn in a day are not through activity, but instead through your resting metabolic rate (RMR).

Weight training is better at preserving your RMR by preserving lean body mass (LBM), which is a significant contributor to RMR, or the calories you burn in a 24-hour period independently of physical activity.

Research has shown exactly why strength training does such a good job of being the top priority on fat loss plans.

Despite an 800 calorie liquid diet (mmm…delicious), the resistance-trained group had no significant LBM losses while the other group lost 4 kg of lean mass.

Think about that for a moment. Eating 800 calories per day is low enough that people would fear the dreaded “starvation effect.” And yet, that’s not what was found. [Note: this is not an endorsement to eat 800 liquid calories per day.]

You, the resistance-trained group also lost significantly more body fat (around 2 kg) and the RMR increased by 4 percent. In comparison, the aerobic group experienced a 13.4 percent drop in RMR.

The resistance group also had greater endurance capacity in the time-to-fatigue test.

This study supports the idea that untrained obese subjects dieting severely will get across-the-board better benefits from strength training instead of aerobic training.

But the benefits aren’t just limited to those that are overweight or obese.

When considered your most direct path to fat loss, it’s understanding why these benefits were so pronounced.

Strength training allows you to maintain a better muscle-to-fat ratio, which not only helps with the way you process food, but also ensures that the amount of calories you burn outside the gym are enough to support all the hard work you dedicate inside the gym.