Note from Steve: This is a guest post from my good friend Lindsay Miller, who’s already written about how to deal with the anxiety involved in approaching people and how to be better at small talk.

Today we’re going to talk about the next step: making friends as a grownup! If you’re a shy nerd like me, it can take some real effort – which is why we asked Lindsay to give us her best tips on how to level up our social circle game – Take it away Lindsay!

Being a little kid was kind of the best, wasn’t it? Between mandatory nap time, pajamas as acceptable formal wear, and an abundance of chicken tenders, kids have a lifestyle that can only be called “ideal.”

But all that great stuff aside, there’s one aspect of childhood about which I’ve become even more nostalgic lately: making friends.

About a year ago, I moved to a new city where I knew approximately none people. This is the fourth time I’ve made such a move, but only the first where I didn’t have school or a job to provide scores of people who were contractually obligated to interact with me. Starting from scratch was a daunting prospect, but with a bit of inspiration from some wee humans, I figured out a few things along the way that helped me… and might help you, too.

Today we’re going to learn how to make friends like we did when we were little.

How do you level up from mere acquaintances to actual buddies?

There’s a lot that we big kids can learn from the smaller versions of ourselves, but let’s start with three main lessons:

Lesson 1: Play in the right sandbox 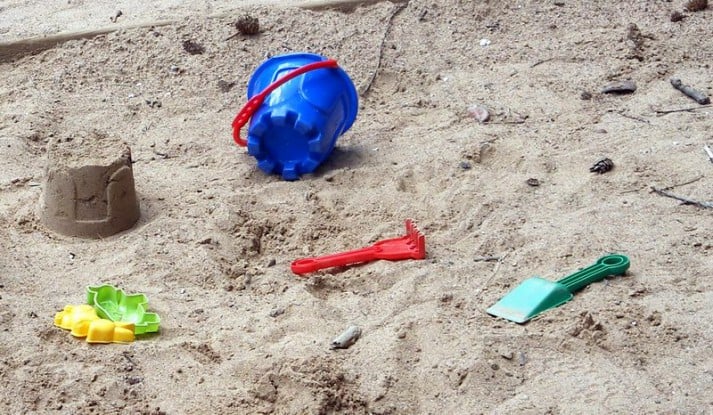 Kids know what they’re into.

Spend five minutes at a playground and it’s clear:

Ask your family what you were like as a kid and they’ll tell you: there was probably stuff you liked, stuff you didn’t, and not much in between.

So why, as adults, do we so often do things that we know we don’t want to do?I’m not talking about life necessities like bills and laundry – or horizon-expanding experiences like traveling alone or learning a new skill.

I’m talking about going to a crazy dance club when we’d really rather be at the premiere of The Avengers, or joining a monthly networking group when all we want to do outside of work is talk about anything but work. Think about where you’ll be happiest, most at ease, and have the most to say—then go to there.

Much of the time, when trying to meet new people, we’re encouraged to “just get out and do stuff!” As we consider which things to go “get out and do,” let’s listen to the little kid inside of us and stick with what we’re into. This dramatically increases the chances of us meeting true friends, and decreases the chances that we’ll be miserable in the process.

Careful readers will notice that this is exactly the same principle behind Steve’s suggestion of the best workout plan: the one you’ll actually stick with!

Whether we’re getting in shape or making new friends, it shouldn’t feel like work or torture. And it doesn’t have to. In fact, a group of nerdy strangers who met up for Camp Nerd Fitness last year might normally tell you that they suck at making friends. Turns out, they just needed to be in the right atmosphere: 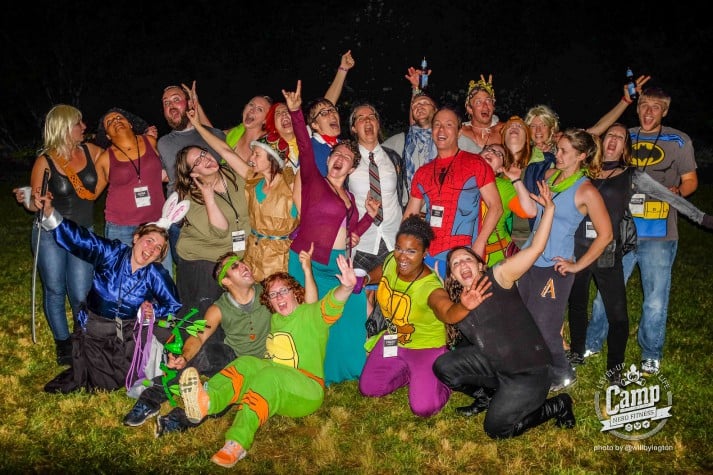 While “playing in the right sandbox” would be my advice to you at any point in history, there’s truly never been a better time to make it happen than today.

Wherever you live and whatever you’re into, a group or con of likeminded people is often just a few clicks away. Check out meetup.com or websites/social media covering local events for some ideas that strike your fancy.

Seriously – we’re nerds! Let’s use technology to our advantage. 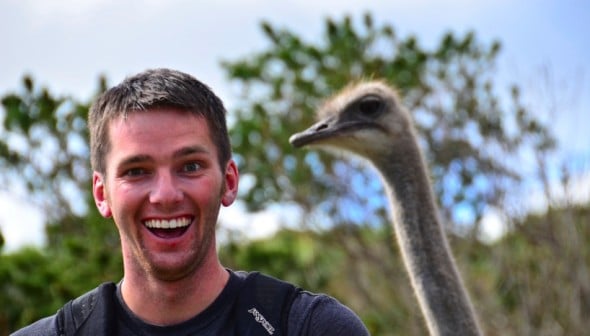 Something else that’s evident fairly immediately with kids is that they lack the little gatekeeper between brain and mouth, which occasionally informs us, “I SHOULD NOT SAY THIS THING.”

My niece demonstrated this in an especially salient manner on a recent family trip, when she pointed to and verbally addressed “the baby in [my] belly.”

Two things I should quickly mention:

Having not received the reaction she expected, she quickly followed with, “That’s okay! My belly sticks out, too!”

TO BE CLEAR, I’m not suggesting that line as a go-to method for making friends. But it’s illustrative of something I do recommend, which is saying the things that other people don’t—or won’t—say.

Take for example the following two scenarios, set at a volunteer event:

Or what about these, set at… say, Camp Nerd Fitness:

The reference to “doing the thing” both frames your upcoming request and slightly distances you from it. It puts the semi-awkward act of exchanging contact information up on stilts for a second, leaving you and the person you’re talking to down on the ground together, pointing up at it and chuckling.

While it’s additionally true that there’s a confidence level involved in telling rather than asking, it could just as easily be posed as a question: “What if… instead of just saying goodbye and never running into you again… I do the thing where I get your email and reach out the next time I hear about something fun going on?”

So often we let little connections lapse and fizzle out because each person assumes that the other would reach out if they wanted to… so then neither one does… and then the other doesn’t, either.

Be the one who does. Do the thing!

In my post about small talk, I described the disarming power of quirkiness. The same principle totally applies here. We get so used to the rote, scripted nature of human interaction that when someone dares to shake things up—to say the (nice!) things other people won’t—it’s guaranteed to capture people’s attention.

If this feels like way too assertive an approach for you, here are some lines that are a bit more passive, but still employ the same disarming tactic:

If your reaction to these scripts is, “Ha! They’re weird, but I can dig it,” then give them a shot. If you’re instead thinking, “I still can’t muster up the courage to sayanything to someone, let alone these out-of-the-box things, AND THUS I REJECT THEM,” then maybe your style will be to go to the same meetup a few weeks in a row just to scope things out a bit first… eventually working up to smiling and saying hi, and then saying to them the following week, “Hey, I see you at these meetings a lot and figured I should introduce myself. I’m Lindsay.”

But you should probably change that last part. Unless your name really is Lindsay.

[Steve’s note: I had to use this very tactic last weekend to make some new dude friends here in Nashville! A group of us were hanging out and I wanted some new friends, so I just asked for numbers for the next time we’re all getting together for beers. It might feel weird, just ask. Use your 20 seconds of courage!]

Now that we’re playing in the right sandbox and saying the things that others won’t, what else can little kids teach us about forging friendships?

Lesson 3: Mind your Ps and Qs 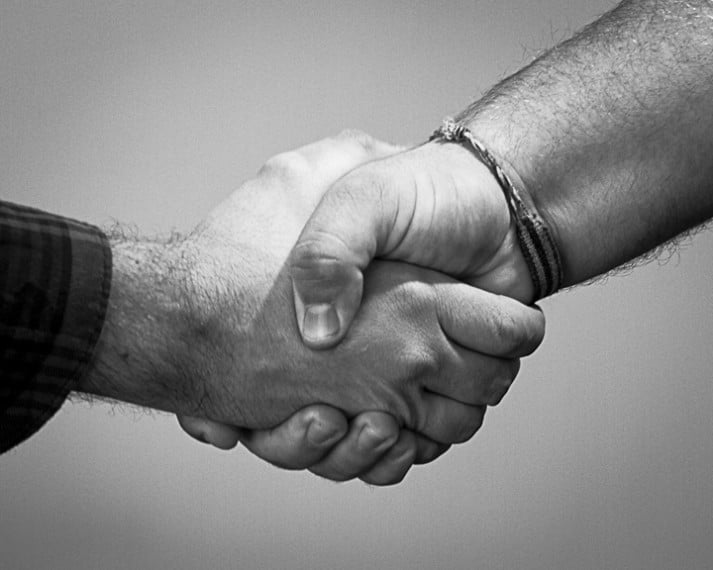 The lessons we first learned as children about the importance of being considerate are just as relevant to us today, perhaps even more so.

After all, as adults, we’re in charge of our own social schedules, and there’s much more competing for our time. This means every time a potential friend puts you on his or her calendar, he or she is actively choosing and prioritizing you over lots of other stuff. That’s a precious gift, and it should be treated as such!

Be a good friend:

Those five things honestly get you 92% of the way there.

Remember that the sandbox in Lesson 1 works both ways: Are you considering their likes and dislikes when you hang out? You might be indifferent between jogging and cycling, but how does your friend feel? Perhaps you notice they have some difficulty with conversation or they’ve told you they’re shy. Maybe they prefer small groups, or talk-free activities like movies or paintball?

This doesn’t mean that you have to grill him or her with 30 probing questions before every potential hangout, or that you should put your own preferences on the backburner completely.

It’s just a gentle reminder of one of the ways in which we can build a new friendship: “Hey, I don’t take you or your time for granted.” Other examples include offering to give them a ride, listening to and remembering the stuff they talk about, and neither sneezing nor coughing directly in their face.

A little bit of consideration goes a long way, and sets a wonderful foundation on which to build together. In the early days of friendship, not every hangout will be a non-stop festival of laughter and merriment.

But something as small as demonstrating respect for people and the time they’ve chosen to share with you is often the difference between pleasant hangouts that never happen again, and those that blossom into deep, lifelong friendships.

If you are trying to make new friends, say yes to every opportunity that comes along at the beginning – if you consistently say no, they’ll stop asking. Conversely, continue to invite people you hope to become better friends with! What’s that? just thinking about all of this gives you social anxiety? Ramit did a fantastic job writing about social anxiety cures last week.

The game of life 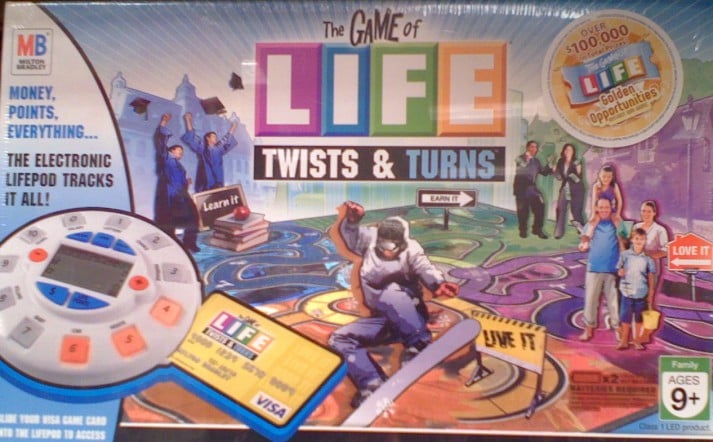 We’ve covered a few tips that will help us embark on new friendships, but I want to share a few thoughts on why I chose this topic in the first place.

In response to my two previous guest posts, I’ve been touched to receive some mail from readers at loveanddatingadvice@gmail.com. Some of these were indeed about love and dating, but the other most common theme has been plain ol’ friendship and the challenges associated with finding it as an adult—particularly for those of us who are not super comfortable in social settings.

Thrillingly, I’ve also gotten to hear from people who have put some of these suggestions to work and have seen their lives improve as a result.

Wait a minute. Challenges… attempts… successes… improvement? This is a classic level-up story! How cool to see that as Rebels level up their physical fitness, they also begin to uncover other dimensions of fitness—social, emotional, romantic—that they feel motivated to attain.

And how important to remember that whatever our current challenges are, whatever our goals or struggles, other people are feeling the exact same things. Who knows, your future best friend might be one of them!

What do you think?

What strategies have you employed to make new friends? What do you most struggle with?

Check out Lindsay on Twitter @RellimYasdnil or send questions/comments at LoveAndDatingAdvice@gmail.com.